The Aluminium Multinationals and the Bauxite Cartel 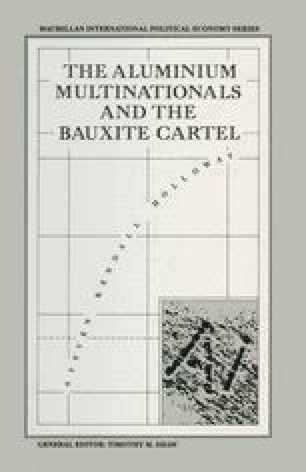 The Response of the Multinational Companies

The success of the Caribbean bauxite producer nations on a second major NIEO front — achieving a higher rate of return on raw material exports — was traced in the previous chapter. For Jamaica and some other IBA members this involved the concerted introduction in 1974 of a tax on bauxite, in effect raising both the price of bauxite to consumers and the revenues for producer governments. As I have shown, the aluminium multinationals seem to have passed on these price increases; so much so that by 1977–8 their profits were at all time highs.

Dominican Republic Multinational Company Producer Government Aluminium Industry Aluminium Ingot
These keywords were added by machine and not by the authors. This process is experimental and the keywords may be updated as the learning algorithm improves.
This is a preview of subscription content, log in to check access.

Cite this chapter as:
Holloway S.K. (1988) The Response of the Multinational Companies. In: The Aluminium Multinationals and the Bauxite Cartel. Macmillan International Political Economy Series. Palgrave Macmillan, London. https://doi.org/10.1007/978-1-349-09093-8_6