The Economics of Imperfect Competition and Employment 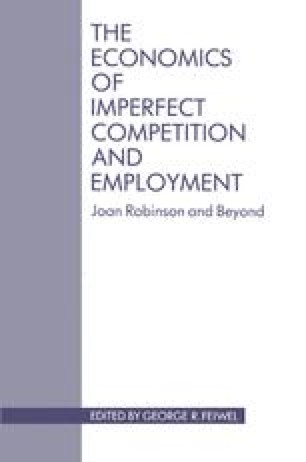 Analyses of industrial competition have attained a new vigor with the application of game-theoretic methods. The process of competition is represented in models that reflect genuine struggles for entry, market power, and continuing survival. Dynamics and informational effects are captured explicitly, although so far only in simplified formulations. Recognition of the importance and intricate complexities of competitive processes began a half-century ago in the work of Joan Robinson (1933), and the first game-theoretic formulations were developed by Shubik (1959) a quarter-century later, but the flowering of this approach began in the 1980s with the recognition that informational asymmetries are crucial ingredients to bring the flavor of struggle to the ensuing dynamic processes. Models that admit both dynamics and private information formulate competition as essentially a bargaining process in which credible communication is limited to costly actions. Each firm’s claim to survival is signalled by its willingness to offer lower prices longer than others. Firms’ struggles for the advantages of monopoly power bring benefits to consumers by dissipating a substantial part of the subsequent profits in the battle to obtain them. This is not the entire story of competition, of course, since also important are, for example, races for cost advantages, product development and differentiation, as well as imposition of search and switching costs on customers to sustain monopoly pricing; nevertheless, it brings theories that describe more realistically the Darwinian aspect of competition.

Fixed Cost Expected Profit Probability Assessment Limit Price Monopoly Price
These keywords were added by machine and not by the authors. This process is experimental and the keywords may be updated as the learning algorithm improves.