The Theory of Capital 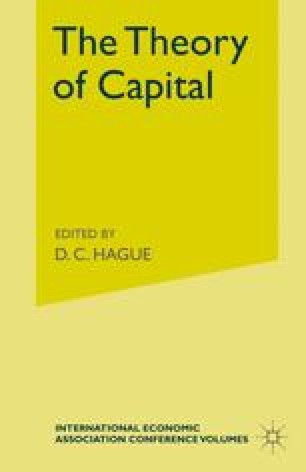 A Theoretical model consists of certain hypotheses concerning the causal inter-relationship between various magnitudes or forces and the sequence in which they react on each other. We all agree that the basic requirement of any model is that it should be capable of explaining the characteristic features of the economic process as we find them in reality. It is no good starting off a model with the kind of abstraction which initially excludes the influence of forces which are mainly responsible for the behaviour of the economic variables under investigation; and upon finding that the theory leads to results contrary to what we observe in reality, attributing this contrary movement to the compensating (or more than compensating) influence of residual factors that have been assumed away in the model. In dealing with capital accumulation and economic growth, we are only too apt to begin by assuming a ‘given state of knowledge’ (that is to say, absence of technical progress) and the absence of ‘uncertainty’, and content ourselves with saying that these two factors — technical progress and uncertainty — must have been responsible for the difference between theoretical expectation and the recorded facts of experience. The interpretative value of this kind of theory must of necessity be extremely small.

Capital Stock Real Wage Capital Accumulation Marginal Product Demand Curve
These keywords were added by machine and not by the authors. This process is experimental and the keywords may be updated as the learning algorithm improves.

Editor’s footnote: Mr. Kaldor’s paper as printed here represents an extended written version of an address delivered by him orally to the conference in accordance with prior arrangement made with the I.E.A. In the subsequent discussion the members of the Round Table did not have the present text in their hands.