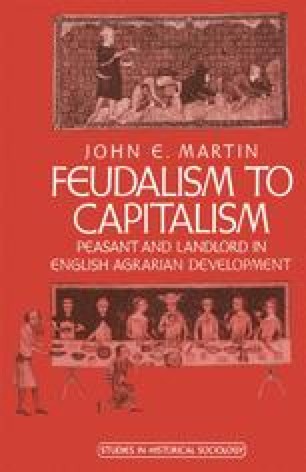 Town, Forest and Felden in the Revolt

In this fina1 chapter, I shall seek both to draw out the involvement of the peasantry and its allies in the revolt in terms of the specific economic structure of the Midland region, and to focus upon the Warwickshire felden peasant communities whose path has been traced, thus far, till the fifteenth century. We must take our analysis beyond the broad preconditions and precipitants for the revolt in order to understand the detailed reasons why peasant communities and townspeople participated in the rising. This requires an analysis of the precise location of types of peasant community and Midland towns within the regional economy. For the former, this entails distinguishing between the forest (or wooded–pastoral) community and the felden community. Within the felden itself, we may distinguish between the two types of peasant community already noted: ‘open’ and ‘freehold’ communities. In this way, the involvement of the peasantry in the revolt of 1607 can be linked back into and explained by the transformations which were experienced from the medieval period onwards.

Seventeenth Century Open Community Sixteenth Century Fifteenth Century Medieval Period
These keywords were added by machine and not by the authors. This process is experimental and the keywords may be updated as the learning algorithm improves.
This is a preview of subscription content, log in to check access.