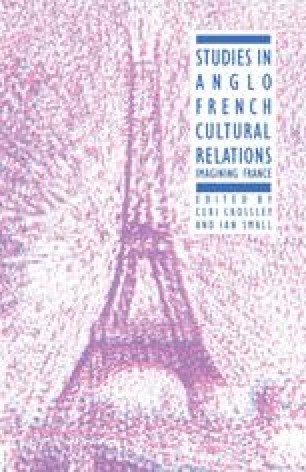 By all the usual yardsticks by which relations between countries are measured — mutual trade, travel, cultural exchange and so forth — the British and the French enjoy a familiarity never known before. Since 1945 Channel crossings have become swifter, safer and more popular. Paris and Provence are home for numbers of British expatriates, be they artists, writers or pop stars or just the merely rich. Despite this recent familiarity, it would be unwise to conclude that the age-old British sense of both unease and anticipation at the prospect of crossing the Channel has been dispelled. Certainly the English Channel remains a hostile and unpredictable natural environment; but in addition it still possesses the attributes of a symbolic as well as a physical barrier, which historically has been instrumental in forming in the minds of us British those famous perceptions of ourselves as a nation of islanders. On embarkation at one of the Channel ports we feel securely enclosed within a system of language and so within a system of recognisable cultural values. The very ships designed to transport us seem to make statements about us: ferries are all car ferries now and all one-class ships. Closer inspection, however, suggests the limitations of such a unitary way of interpreting the signs.

Natural Ally Intellectual Culture Detective Story French Culture Mutual Trade
These keywords were added by machine and not by the authors. This process is experimental and the keywords may be updated as the learning algorithm improves.

It is absurd to generalize — all we can say is that Anglo-French culture exists, that Byron and Constable have intoxicated Paris, as Voltaire and Rousseau have shaken London, but that, if we are to understand what Anglo-French cultural relations are going to mean, we must try to isolate the particular element with which French culture has enriched us, which we cannot do without, and which we pine for when deprived of; and this I would identify as the sense of intellectual reality.