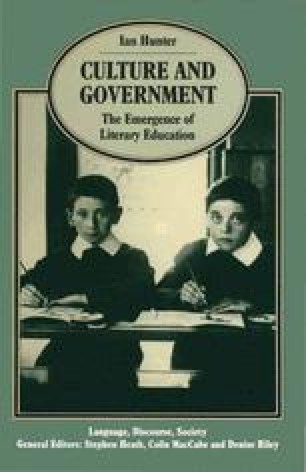 In her book, The Preachers of Culture, Margaret Mathieson outlines four major sources for the genesis and development of English. These are to be located, she argues, in the attacks on the classical curriculum of the grammar schools, culminating in the arguments of the Victorian liberals in favour of ‘modern subjects’; in Matthew Arnold’s post-Romantic campaign to install literary culture at the centre of popular education; in a tradition of analysis stressing the threats to such a culture posed by the industrialisation of community life and the commercialisation of culture itself; and in the progressive and experimental education of the early twentieth century, with its stress on the creativity of the child-mind and the need for a non-coercive pedagogy. Mathieson sees these factors culminating in a conception of English that elevates it from the rank of ‘knowledge subjects’ and transforms it into the central vehicle of the child’s experience, responsible for the latter’s emotional, social and moral development. She also observes that this transformation was accompanied by the elevation of the English teacher into a special personality – combining warmth and morality, sympathy and cultural authority – which, she says, sits oddly with the predominantly working-class origins of English teachers and English itself.

Human Personality Moral Norm Literary Criticism English Teacher Literary Culture
These keywords were added by machine and not by the authors. This process is experimental and the keywords may be updated as the learning algorithm improves.
This is a preview of subscription content, log in to check access.