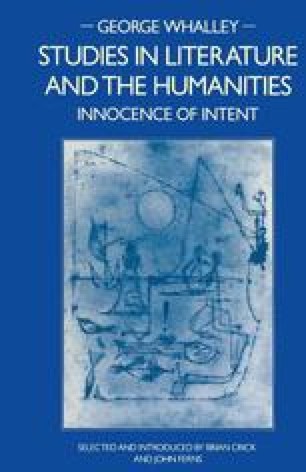 Studies in Literature and the Humanities pp 102-121 | Cite as

‘Research’ and the Humanities

The word ‘research’ is a noun. Nouns, being functionally inert, tend to be ‘thingy’ — that is, they seem to stand for ‘things’ even when they represent abstractions. Groups of nouns often indicate conceptual distinctions that do not correspond to ‘real differences’; serious error can arise from mistaking conceptual distinctions for real divisions. Yet it is difficult to avoid the assumption that a noun — simply by existing — not only ‘means something’ but also ‘stands for something’; that ‘some thing’ stands over against it, that the noun refers to that ‘thing’, and that therefore the ‘thing’ can be readily distinguished and defined or that a ‘meaning’ can be uncritically assumed for it. Such an assumption is not always sound. Many nouns refer to abstract and elusive notions, yet by being nouns (and ‘thingy’) they beguile us into supposing that the notions they refer to are neither abstract nor elusive. Indeed it is particularly those nouns that refer to vague, abstract and ill-defined notions that, out of sheer convenience, commend themselves most in fashionable jargon. Jargon-words provide a handy and often unnoticed way of avoiding or concealing the need for precise definition.

Humane Study Conceptual Distinction Sustained Inquiry Oriented Problem Real Division
These keywords were added by machine and not by the authors. This process is experimental and the keywords may be updated as the learning algorithm improves.

Methods and object can no longer be separated.

We have to learn to think, not less but more logically, without ever forgetting that the terms we are logically combining are not labels, but that each of them in itself is a symbol that flouts, by transcending, the requirements of logic.