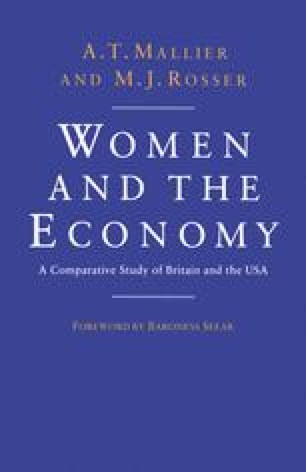 The Demographic and Economic Perspective

The recognition of a relationship between the size of a nation’s population and its potential labour force has long been accepted by economists. When Adam Smith (1970, p. 62) expressed the view that the prosperity of a country was dependent upon the increase in the number of its inhabitants, he was acknowledging the relationship between economic change and demographic change. Therefore in examining the changing significance of the female component of the labour force during the twentieth century, in either Britain or the USA, demographic changes need to be considered.

Labour Market Labour Force Activity Rate Married Woman Female Population
These keywords were added by machine and not by the authors. This process is experimental and the keywords may be updated as the learning algorithm improves.
This is a preview of subscription content, log in to check access.