Coleridge as Poet and Religious Thinker 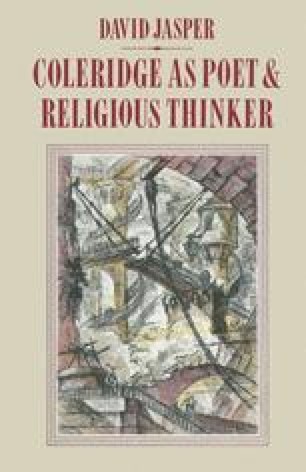 Coleridge as Poet and Religious Thinker pp 1-7 | Cite as

Many years ago, when I was looking over Piranesi’s Antiquities of Rome, Mr. Coleridge, who was standing by, described to me a set of plates by that artist, called his Dreams, and which record the scenery of his own visions during the delirium of a fever. Some of them (I describe only from memory of Mr. Coleridge’s account) represented vast Gothic halls: on the floor of which stood all sorts of engines and machinery, wheels, cables, pulleys, levers, catapults, &c. &c. expressive of enormous power put forth and resistance overcome. Creeping along the sides of the walls, you perceived a staircase; and upon it, groping his way upwards, was Piranesi himself: follow the stairs a little further, and you perceive it come to a sudden abrupt termination, without any balustrade, and allowing no step onwards to him who had reached the extremity, except into the depths below. Whatever is to become of poor Piranesi, you suppose, at least, that his labours must in some way terminate here. But raise you eyes, and behold a second flight of stairs still higher: on which again Piranesi is perceived, by this time standing on the very brink of the abyss. Again elevate your eye, and a still more aerial flight of stairs is beheld: and again is poor Piranesi busy on his aspiring labours: and so on, until the unfinished stairs and Piranesi both are lost in the upper gloom of the hall. With the same power of endless growth and self-reproduction did my architecture proceed in dreams.1

Enormous Power Polar Logic Divine Creation Religious Thinker Acrimonious Debate
These keywords were added by machine and not by the authors. This process is experimental and the keywords may be updated as the learning algorithm improves.
This is a preview of subscription content, log in to check access.