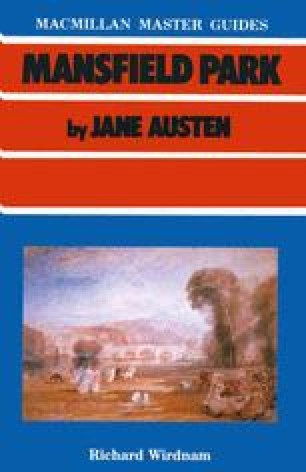 What the Novel is About

Through the behaviour of her central characters, Jane Austen examines certain moral issues of universal significance. Like most eighteenth-century writers she believed that fiction should teach as well as entertain, and in Mansfield Park we are more aware of this than in any of her other novels. After the publication of Pride and Prejudice she commented, in a letter, that it was ‘rather too light and bright, and sparkling’, and though this playful remark rather ignores the moral content of that novel, it certainly could not be applied to Mansfield Park. On the contrary, many readers feel that the later novel lacks wit and vivacity — that it is rather solemn and preaches too obviously at them. Those readers who admire Elizabeth Bennet complain that Fanny Price is insipid, and that the Crawfords, who share Elizabeth’s fondness for ‘follies and nonsense, whims and inconsistencies’, are treated unfairly, if not vindictively, by their creator. In doing this, though, they miss the whole point Jane Austen wishes to make, for though the Crawfords are entertaining characters, and undoubtedly possess all the social graces, their morals are lax in a way that Elizabeth Bennet’s never were — they are ‘unprincipled’, and the word ‘principles’ is used many times in the novel to emphasise its author’s moral concerns.