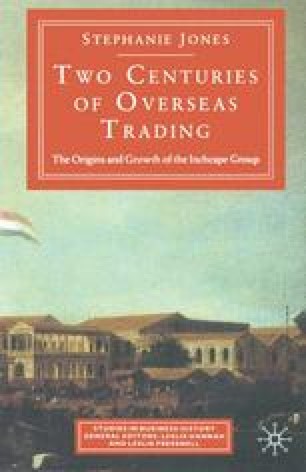 Conflict and Profit: The Companies in the Second World War, 1939–45

Chapter
Part of the Studies in Business History book series

Previous chapters have concentrated on the emergence and development of several merchant partnerships which, surviving the depression of the 1930s, became established as sound commercial enterprises. Many were already linked in an embryonic ‘Inchcape Group’ through the prominence of the Inchcape family on their Boards of Directors and among their sharedholders1; others were ultimately to merge with them to form the Group in 1958 or to join it later. The process of the gradual growth of these links since then began with the Second World War. It then became clear to the Third Lord Inchcape, having recently inherited investments in a large collection of mainly Indian-based trading and agency firms and tea estates, that to protect these holdings and ensure their survival and growth a form of reorganisation and rationalisation was required. In what ways did the Second World War accelerate this process of consolidation? How did the experience of the companies in this worldwide conflict affect their future growth, especially in terms of their eventual inclusion in the Group?

Shipping Agency Sodium Bichromate East African Coast Manpower Shortage Agency Firm
These keywords were added by machine and not by the authors. This process is experimental and the keywords may be updated as the learning algorithm improves.
This is a preview of subscription content, log in to check access.