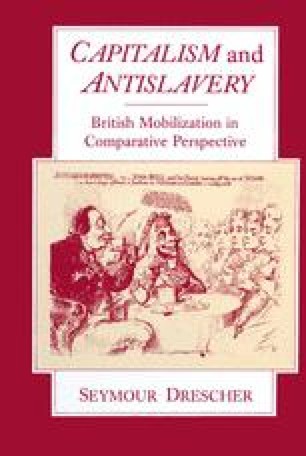 Capitalism and Antislavery pp 1-24 | Cite as

The Foundations of Slavery and Antislavery

For almost a century and a half the history of British antislavery was the story of its leaders. Abolitionist historiography remained serenely ensconced within the framework of Thomas Clarkson’s first narrative of the movement in 1808. Overcoming an entrenched economic interest, the abolitionist ‘Saints’ won a series of victories for humanity over brutal materialism and exploitation. Antislavery was the quintessential example of the Whig interpretation of history: a progressive political narrative more closely interwoven with religious than with economic or social development.

Eighteenth Century Slave System Slave Trade Slave Labour African Slave
These keywords were added by machine and not by the authors. This process is experimental and the keywords may be updated as the learning algorithm improves.
This is a preview of subscription content, log in to check access.