Pioneers of Modern Economics in Britain 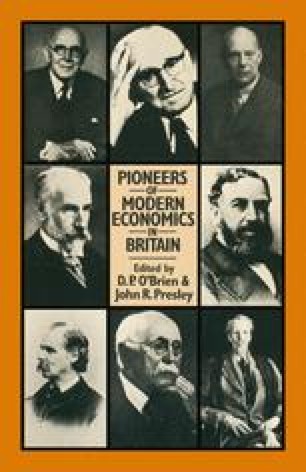 Pioneers of Modern Economics in Britain pp 234-261 | Cite as

Aristocratic in temper and origins; physically, morally and intellectually fearless; clear and incisive in thought; the embodied principle itself of following the logic where it leads; the soul of scholarly generosity; Friedrich August Hayek is one of the outstanding sculptors of this age’s thought. He was born on the 8 May 1899 into a family academically distinguished on both sides. At the University of Vienna he gained two doctorates, becoming Dr. jur. in 1921 and Dr. rer. pol. in 1923. From 1927 till 1931 he was Director of the Austrian Institute for Economic Research. In 1931 as visiting lecturer at the London School of Economics he gave the lectures which were published in that year as Prices and Production1 and which gained for him, in those days of baffled debate about the causes of the great depression which had struck the industrialised world like a plague, his first sensational prominence. In that year he was appointed Tooke Professor of Economic Science and Statistics in the University of London. He held this Chair until, in 1950, he moved to Chicago. In 1962 he was appointed Professor of Economic Policy at the University of Freiburg, and in 1974 he was made honorary professor at the University of Salzburg. In 1944 he had been given an honorary Doctorate of Science by the University of London, and in that year also he was elected a Fellow of the British Academy.

Output Function Banking System Consumable Good Full Employment Productive Service
These keywords were added by machine and not by the authors. This process is experimental and the keywords may be updated as the learning algorithm improves.
This is a preview of subscription content, log in to check access.