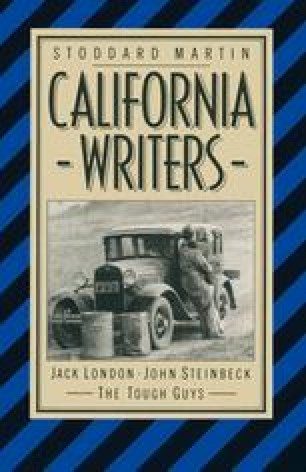 London’s first great novel was The Sea Wolf (1903). Its hero, Wolf Larsen, captain of the sealing-ship Ghost, is the classic literary embodiment of the Nietzschean Übermensch. Its narrator, the poet and critic Humphrey Van Weyden, whom Larsen has shanghaied from his pleasant dilettantish life in the San Francisco Bay Area, seems Larsen’s natural opposite in his over-civilisation and timidity. Only temporarily, however, can Larsen reduce Van Weyden to the status of an Underman. In the perfect ‘X’ the novel forms, Van Weyden grows to physical as well as moral strength at the same time as Larsen’s physical dominance is sapped by his moral brutality. Education and culture preserve Van Weyden from the abyss. The true Underman in London’s Dantesque scheme must issue from some hideous and blighted background. He must be a villain totally lacking knowledge of his villainy; a man so consistently wronged by the ways of the world, so consistently remote from access to decent civilisation, as to defy the existence of morality altogether. This type will be the true brute, not the Nietzschean like Larsen, who is conscious of his brutality as much as of the morality it is designed to supersede. He will exist through the pragmatism of satisfying immediate needs. He will not shrink from crime if it serves his interests — he will not recognise crime as crime if it serves his interests — and he will be condemned. by his fellows perpetually, scapegoated whenever there is any provocation, because of his evident ignorance of, and transparent carelessness for, the minimum fellow-feeling.

Poker Player Ideal Vision Male Persona Promise Land Eastern European Immigrant
These keywords were added by machine and not by the authors. This process is experimental and the keywords may be updated as the learning algorithm improves.
This is a preview of subscription content, log in to check access.