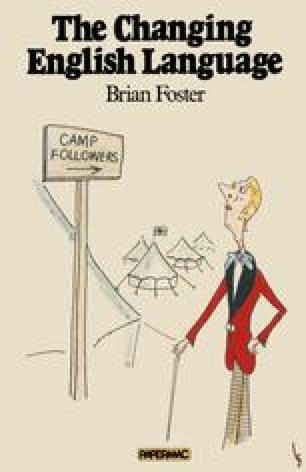 In the year 1914 a young girl named Monica Baldwin entered a convent, remaining secluded there until 1941 when she was released from her vows and returned to the outer world. In the intervening twenty-eight years wars and revolutions had come and gone in Europe, her uncle, Stanley Baldwin, had guided the destinies of his country for some time, technical developments had altered the conditions of everyday life almost beyond recognition, but all these events had left virtually untouched the small religious community to which she had belonged. In 1949 Miss Baldwin published her impressions of those first bewildering years of her return to a world in which the motor-car had ousted the horse and carriage, and where respectable women showed their legs and painted their faces. Yet it was not only these odd sights that astounded her, for she was even more puzzled by what she heard. During a railway journey the term ‘luggage in advance’ meant nothing to her, so in desperation she implored the porter to do as he thought best. Reading the daily newspapers made her feel idiotic in the extreme, because the writers of reviews and leading articles used words and phrases such as Jazz, Gin and It, the Unknown Soldier, Lease-lend, Hollywood, Cocktail, Striptease and Isolationism.

‘…let us remember that a language is never in a state of fixation, but is always changing; we are not looking at a lantern-slide but at a moving picture.’