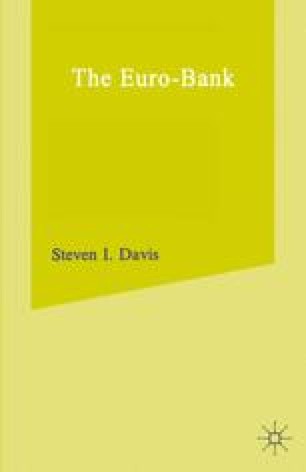 In the period since the first Euro-banks appeared in the mid-1960s, an almost unprecedented physical growth in a boom atmosphere through 1973 was checked by a chain of psychological and economic shocks administered in 1974 by a series of bank failures, the prospect of substantial international loan losses for the first time since the Second World War, and the world-wide tremors created by the shift in resources to the OPEC countries. In the five years since this series of shocks, the Euro-banks have been confronted not only by increased competition in the international banking market which had drastically modified the risk/reward ratio in international lending, but also competition in a different sense from their stockholders which has forced them to reexamine their own objectives and strategy. Most Euro-banks have thus lived through periods of both boom and adversity, and, while many chapters in their history remain to be written, it is possible to identify in mid-1979 with greater precision the major unresolved issues confronted by these institutions.

Real Estate Investment Trust Loan Loss Loan Portfolio International Bank Interbank Market
These keywords were added by machine and not by the authors. This process is experimental and the keywords may be updated as the learning algorithm improves.
This is a preview of subscription content, log in to check access.