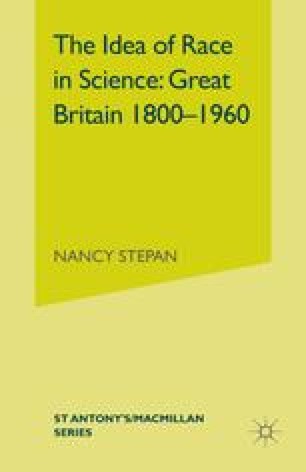 The nineteenth century closed with racism firmly established in popular opinion and in science. Despite disagreements among biologists about the proper definition of ‘race’, and the elusiveness of the very concept when attempts at racial classification were made, most scientists thought that the mental, moral and physical differences between racial groups were profound and socially significant. Belief in the racial superiority of whites, and the practice of racial discrimination at home and abroad, if often deplored on moral grounds, had nevertheless acquired some sanction in the seemingly objective findings of modern science.

Mental Ability White Race Cephalic Index Human Heredity Eugenic Movement
These keywords were added by machine and not by the authors. This process is experimental and the keywords may be updated as the learning algorithm improves.
This is a preview of subscription content, log in to check access.