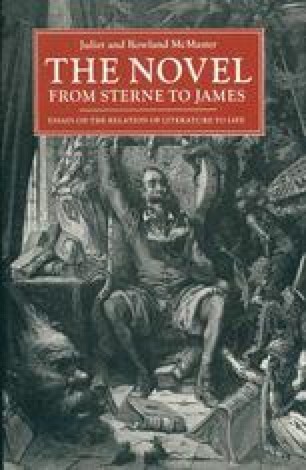 The Curse of Words in He Knew He Was Right

Uneasiness about relationships between fact, language and truth pervades Victorian literature. For Browning’s Pope in The Ring and the Book, language itself is a sign of the fall:

barren words Which, more than any deed, characterize Man as made subject to a curse. (x, 348–50)

Trollope seems to share his opinion. What he says about an attempt by Grey and Palliser to reach agreement in Can You Forgive Her? could equally well apply to the “lawyer-pleadings” of Browning’s poem: “We all know that neither of them would put the matter altogether in a true light. Men never can do so in words, let the light within themselves be ever so clear.”1 In He Knew He Was Right Trollope conducts his most sombre exploration of mismatching between language and truth. A. O. J. Cockshut has observed that “the book raises the whole question of the value of truth and the importance of words” and has examined how, for the principal characters, Trevelyan and his wife, Emily, “words have a power of their own which the protagonists constantly undervalue”.2

Sexual Infidelity Principal Character Hard Word Pure Nothingness Marital Harmony
These keywords were added by machine and not by the authors. This process is experimental and the keywords may be updated as the learning algorithm improves.
This is a preview of subscription content, log in to check access.