Paths of Development in Capitalist Agriculture 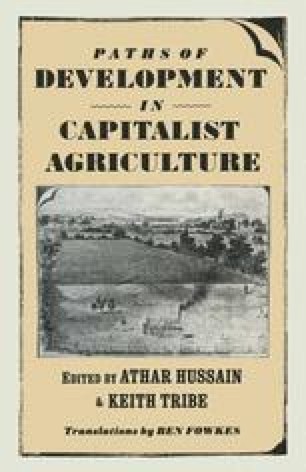 Paths of Development in Capitalist Agriculture pp 41-59 | Cite as

Comrade Kautsky followed my remarks on ‘Economic Differences between Agriculture and Industry’ with an article entitled ‘The Competitive Capacity of the Small-scale Enterprise in Agriculture’, in which, while expressing his far-reaching agreement with me on some matters, he presented a series of significant contradictory opinions on others. The points of agreement would have been more far-reaching, and the points of disagreement less significant, if Comrade Kautsky had only stuck precisely to the area of investigation I intended my remarks to cover. In the interest of the greatest possible clarification of the problem at present under discussion I must emphatically oppose the ‘incorrect extension’ of the basic idea of my remarks made by Comrade Kautsky at the opening of his article. He writes there: ‘Comrade David asserts on the contrary that this’ (namely the sentence in the programme according to which economic development leads with natural necessity to the ruin of the small-scale enterprise) ‘is only valid for industry; in agriculture the small-scale enterprise is well able to compete with the large-scale one.’ I did not compose this sentence with the intention of giving it such a universal validity and extension for all time to come, and I do not now have such an intention.

Domestic Industry Livestock Breeding Production Cooperative Tenant Farming Cooperative Enterprise
These keywords were added by machine and not by the authors. This process is experimental and the keywords may be updated as the learning algorithm improves.
This is a preview of subscription content, log in to check access.