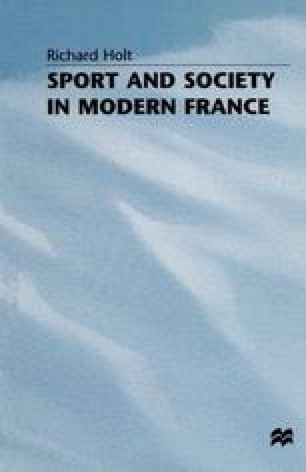 For a good many ‘sportsmen’ physical exertion was manifestly less important than the social advantages conferred by sport. Perusing the statutes of a wide range of clubs, it is evident from the declared objectives of numerous sporting bodies, as Well as from the way in which members spent their time and money, that eating, drinking and the art of conversation were integral aspects of the sporting life. For some, especially the older members, such social possibilities might well provide the prime reason for joining a club or for staying on as a member after the desire or the ability to engage in strenuous physical exercise had long passed. In the privacy of their clubs, which often met in the back room of a local café, men sought to cultivate the timeless art of conviviality and reaffirm the bonds of masculine society. Even the younger and fitter men were often as anxious to make use of sport in the cause of friendship as they were to build up their muscles or to win the next match. For the young and old alike, going to ‘the club’ — be it a choral society, a political organisation, a trade union or a rugby, cycling or hunting club — could offer a new and valuable form of male association. The rise of the sports club must be located in the wider context of the collapse of traditional culture and the emergence of new forms of social life.

Field Sport Youth Club Drinking Place Back Room Average Membership
These keywords were added by machine and not by the authors. This process is experimental and the keywords may be updated as the learning algorithm improves.
This is a preview of subscription content, log in to check access.