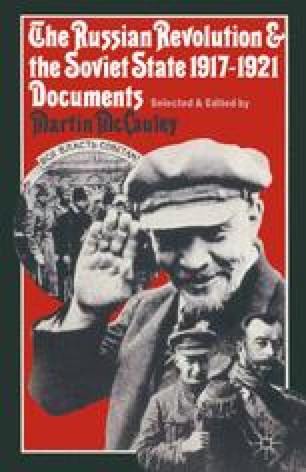 The years immediately following the October revolutwn were marked by great innovations in the cultural field. Artists of the stature of Malevich, Gabe, Chagall, Kandinsky and El Lissitzky were all active in Soviet Russia. In the theatre Meyerhold, in literature Mayakovsky, in the cinema, Vertov, to name only a few, were in full flow in their various spheres. Some wanted to dismiss the cultural achievements of the pre-1917 era since they were almost entirely the work of bourgeois writers and artists. The Proletarian Culture movement sought to promote culture among the workers and encourage them to express themselves in art, drama, poetry, literature, etc. The Proletcult theatre was very significant. Propaganda, promoting the new order, was put on wheels. An agit-train travelled around providing workers, peasants and soldiers with new sensations. The advent of a Soviet Russia meant the beginning of a new era and how better to drive this home than to provide entertainment based on the marvels of the machine age.

Class Struggle Creative Thought Communist Society Russian Revolution Cultural Achievement
These keywords were added by machine and not by the authors. This process is experimental and the keywords may be updated as the learning algorithm improves.
This is a preview of subscription content, log in to check access.