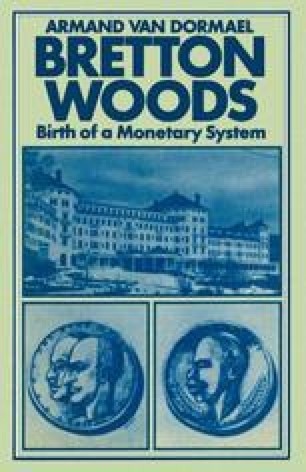 …And Takes the Lead

A full year had passed since Keynes had first circulated his ‘Proposals for an International Currency Union’ in the Treasury. A considerably revised version was now available in Washington, and it was agreed that conversations should start immediately. On 10 September 1942, the fust discussion of the Keynes plan, now called ‘Proposals for an International Clearing Union’, took place at the State Department, in Mr Berle’s office. Phillips and Opie, Pasvolsky and White were present. Berle said he understood that ‘this was an unofficial document, though it had been thoroughly canvassed by the British Government. Sir Frederick Phillips said that this was true. … It was informal in the sense that formal discussions under Article VII of the Lend-Lease Agreement had not yet commenced. But if they were to commence, this would be one of the formal documents promptly laid upon the table.’ Berle then said that, while he understood that the discussions were strictly British-American, ‘we had, in similar matters, found it highly desirable to draw in, when appropriate, other pivotal members of the United Nations, notably Russia and China. We felt it unwise to give any impression that the British and American Governments were making up a plan and then requiring everyone else to take it or leave it.’

International Currency Commercial Policy Capital Movement Debtor Country Stabilisation Fund
These keywords were added by machine and not by the authors. This process is experimental and the keywords may be updated as the learning algorithm improves.
This is a preview of subscription content, log in to check access.