The Economics of Co-Determination 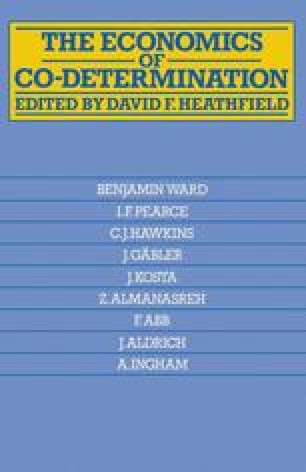 Participation and the Nature of the Firm

This paper contains observations on workers’ participation from the viewpoint of some economic theories of the nature of the firm and, in particular, of the nature of the employment relationship. Economic theorising on the firm has concentrated on the market behaviour of firms, i.e., on the content of a certain class of decisions rather than on how, or by whom, decisions are made; even the theory of the cooperative firm, developed by Ward, Vanek and others, is a theory of the market behaviour of such enterprises. The problem of the internal viability of a co-operative (or, more generally, a participatory) enterprise does not seem to have attracted very much attention from economists; but when it is recalled that the theory of the firm (co-operative as well as profit-maximising) presupposes that the firm is efficiently organised, the importance of the internal viability of the firm is obvious whilst the claims made on behalf of participation have tended to emphasise changes that follow internal reorganisation; however, organisational factors have been neglected in modern economics (compared with Marshall, say, one of whose ‘four agents of production’ was organisation!) in favour of market analysis. Recently however organisational factors have come to be emphasised in the treatment of ‘managerial slack’ and ‘X-efficiency’, and of course in the theories of the employment relationship to be considered later.

Moral Hazard Welfare Economic Collective Bargaining Employment Relation Employment Relationship
These keywords were added by machine and not by the authors. This process is experimental and the keywords may be updated as the learning algorithm improves.
This is a preview of subscription content, log in to check access.