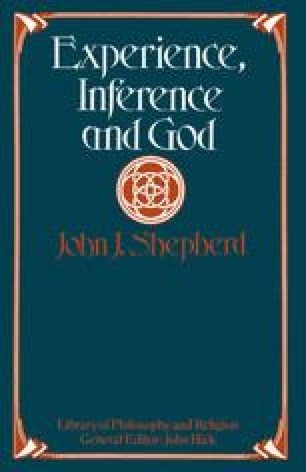 A number of thinkers, including I. Trethowan, M. Pontifex and H. D. Lewis, and to some extent E. L. Mascall and A. Farrer, have canvassed the possibility of taking a putative metaphysical intuition or apprehension of the source of being as a valid basis for belief in God. To quote Lewis: ‘We seem to see that in the last resort the world just could not exist by some extraordinary chance or just happen… all that we encounter points to a Reality which is complete and self-contained and which is the ultimate ground or condition of all the conditioned, limited reality we find ourselves and the world around us to be.’1 We should, he urges, adopt Trethowan’s shrewd advice to go on looking ‘at what being stands for until it breaks into finite and infinite’. This ‘one leap of thought in which finite and infinite are equally present and which cannot be broken up into steps which we may negotiate one by one’ is the ground of our belief. The mistake of the traditional arguments, including the cosmological argument, is in ‘trying to break into a series of steps what is in fact one insight ’.2 The basis of belief is thus an apprehension of God and the world in the ‘cosmological relationship’ (Farrer), an ‘intuition’ of God (Lewis) or, as Mascall says, a ‘contuition’. The sense of contingency as it has been briefly delineated here becomes a sense of ‘contingency’ in an explicitly theological sense, that is to say, it deepens into a feeling of dependence, yet ‘not just a feeling… but a conviction or insight, a sense that something must be, a cognition in more technical terms’.3

Religious Experience Sufficient Reason Logical Deduction Logical Necessity Ontological Argument
These keywords were added by machine and not by the authors. This process is experimental and the keywords may be updated as the learning algorithm improves.
This is a preview of subscription content, log in to check access.