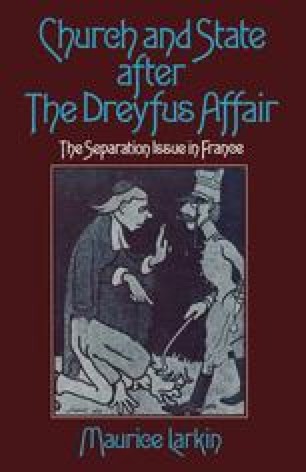 The year 1899 was a sad one in the fortunes of the French Church. The mildly enervating fumes of the esprit nouveau had long since been dispersed by the glacial wind of the 1898 elections. But the recipe still existed; and there was still a strong demand for it among the socially conservative Republicans. ‘Les événements’ however, of 1899 had given new life to the old democratic cry ‘The Republic in danger’; and there was an increasing demand for a new ministry which would keep order and restore public confidence in the integrity of the servants of the State. The man selected for this daunting task was the cold but honest René Waldeck-Rousseau (22 June 1899–7 June 1902), a one-time Gam bettist who had gradually moved in a conservative direction, as his legal practice took him into the world of big business and high finance. Untouched by the parliamentary scandals of the last fifteen years, this fishy-eyed man of few enthusiasms inspired a respect that went far beyond the ranks of the Opportunists.1

Religious Order Catholic School Catholic Education Parliamentary Majority White Father
These keywords were added by machine and not by the authors. This process is experimental and the keywords may be updated as the learning algorithm improves.
This is a preview of subscription content, log in to check access.