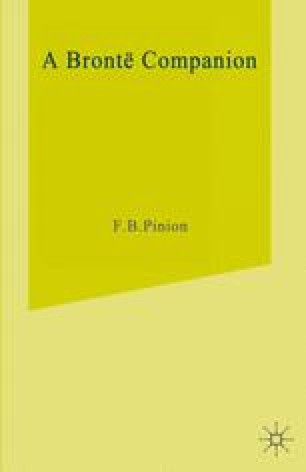 Of the Brontës it is Emily who, through her works, is most associated with Haworth and its moorland. scenery. Little is known of her life. She was born at Thornton on 30 July 1818. Though she was ‘the pet nursling of the school’, the deep and overriding attachment to home which she seems to have felt all her life may have taken root at Cowan Bridge when she was only six. She and Anne participated in the creative drama initiated by Charlotte and Branwell in June 1826, but they must have found it impossible to maintain a lively interest in the fictional writing which ensued. The fascination of Arctic scenes, which may have originated in Bewick’s introduction to the second volume of his History of British Birds, to be fostered by accounts of Parry’s voyages, influenced Emily and Anne when they decided to set up in partnership, and leave Branwell to go his way, in 1831. Charlotte was at Roe Head, and Gondal fiction may have evolved from Anne’s taking her place as Emily’s bedroom companion, the two improvising play serials just as Charlotte and Emily had done.

Paradise Lost Fictional Writing Creative Drama Flowering Cherry Adolescent Reading
These keywords were added by machine and not by the authors. This process is experimental and the keywords may be updated as the learning algorithm improves.
This is a preview of subscription content, log in to check access.