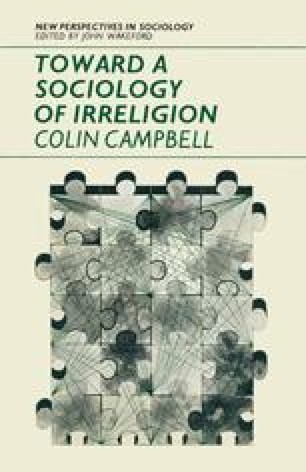 Toward a Sociology of Irreligion pp 46-96 | Cite as

Secularism was the pre-eminent irreligious movement of the nineteenth century. It not only predated both the positivist and Ethical Culture movements but also surpassed them in extent and exceeded them in its impact on contemporary society. Also unlike these other movements, Secularism was an intimate part of the radical tradition in political and social reform; whereas ethicists and positivists might feel obliged to engage in public service and press for reform because of their convictions, the secularists’ views on religion were more likely to be an extension of the radicalism which they had already adopted in political matters. In this sense Secularism was a nineteenth-century inheritor of the tradition of total radicalism which had burst upon the European scene with the French Revolution.

Cite this chapter as:
Campbell C. (1971) Irreligious Movements in Britain and America during the Nineteenth and Twentieth Centuries. In: Toward a Sociology of Irreligion. New Perspectives in Sociology. Palgrave, London. https://doi.org/10.1007/978-1-349-00795-0_3