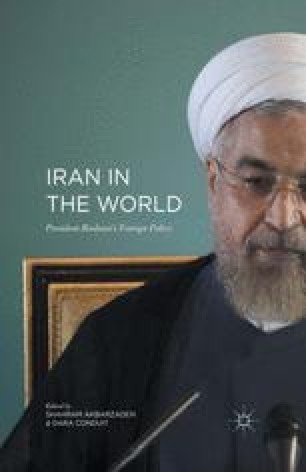 President Hassan Rouhani surprised onlookers in June 2013 by winning the first round of the Iranian presidential election outright. Rouhani had campaigned on a platform of moderation, promising to form a “government of prudence and hope,” and raising expectations of an imminent shift in Iran’s international engagement.1 On the campaign trail, Rouhani broke a number of political taboos. He criticized media censorship in a live television interview, questioned the need for heavy-handed state security, and declared that the 2009 postelection protests were “natural and popular.”2 These statements were seen as potentially significant given that the two reformist candidates from the 2009 election (Mir Hossein Mousavi and Mehdi Karroubi) remained under house arrest, accused of carrying out a foreign plot against the Islamic regime.

Foreign Policy World Economic Forum Iranian Economy Nuclear Issue International Sanction
These keywords were added by machine and not by the authors. This process is experimental and the keywords may be updated as the learning algorithm improves.
This is a preview of subscription content, log in to check access.