The Middle East Economies in Times of Transition 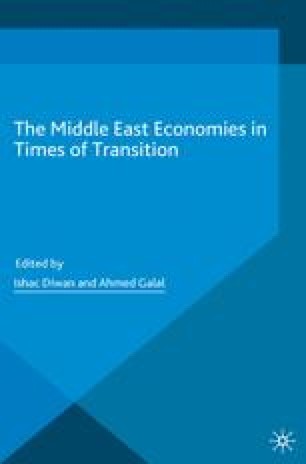 On December 19, 2010, Iran embarked on an ambitious reform of its extensive subsidies. Energy prices that had been kept well below international levels for decades were raised by a factor of 3 to 9 and bread prices were doubled. Energy price reform had been discussed for at least a decade, and the specific plan for this particular reform program was announced by president Ahmadinejad in 2008 and enacted into law in January 2010. This attempt at reform ended a huge government subsidy, estimated at upwards of $70 billion per year, or nearly $1000 per person per year. It was distributed highly unequally and caused Iran’s productive sectors to become the least efficient in the world (Guillaume et al 2011, IEA 2010, Salehi-Isfahani et al 2012).

Energy Price Purchasing Power Parity Cash Transfer Headcount Ratio Energy Subsidy
These keywords were added by machine and not by the authors. This process is experimental and the keywords may be updated as the learning algorithm improves.

The research for this policy brief was supported by a grant from the ERF RIAD initiative. I am grateful to the Statistical Center of Iran for the survey data. This paper first appeared as ERF Policy Perspective No. 13, 2014.