The Aegean Sea after the Cold War 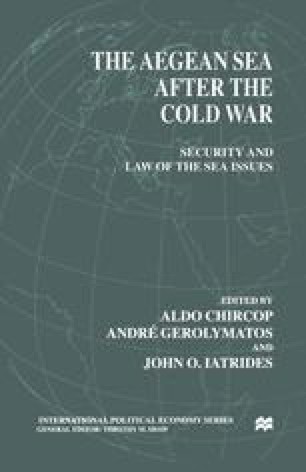 Greece and the Law of the Sea: A Greek Perspective

On 21 July 1995, Greece ratified the 1982 UN Convention on the Law of the Sea (hereafter referred to as the LOS Convention).1 The political and substantive context of the Greek ratification of the LOS Convention has been discussed elsewhere.2 This chapter concentrates on the impact of the 1982 Convention on Greek law of the sea interests and more specifically on its implications for the Greek-Turkish dispute in the Aegean Sea. Since Turkey is not a contracting party to the LOS Convention, the primary issue in this regard is whether the Convention provisions reflect general customary law.

Continental Shelf Exclusive Economic Zone Geneva Convention Official Gazette Greek Island
These keywords were added by machine and not by the authors. This process is experimental and the keywords may be updated as the learning algorithm improves.
This is a preview of subscription content, log in to check access.