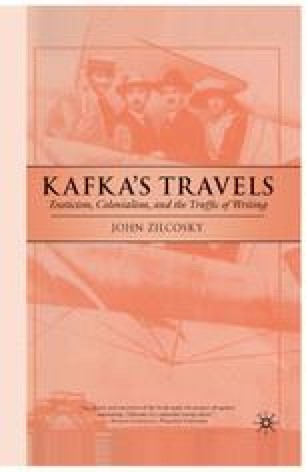 Of Sugar Barons and Land Surveyors: Colonial Visions in Schaffstein’s Little Green Books and The Castle

Readers have long puzzled over the profession of the protagonist of Kafka’s The Castle (Das Schloß). Why does Kafka choose to make the faceless hero of his most mysterious novel a land surveyor (“Landvermesser”)? Since K. never actually does any surveying in the novel (he doesn’t even possess any surveying equipment), the choice of profession might seem to be relatively unimportant. But is it? K. is defined throughout by this putative career, which effectively replaces his name. To the other characters (and to the reader), he becomes “Herr Landvermesser,” the “ewige [eternal] Landvermesser” or simply “Landvermesser” (thus the capitalization in the English translation).1 Critics seem to agree on the importance of unravelling K.’s profession, but their efforts have led only to suggestive yet widely differing metaphorical readings. Does surveying signify artistic ambition: observing, writing, and drawing?2 The process of reading: delimiting semiotic difference?3 Messianic promise: rebuilding Zion?4 Some readers have questioned K.’s profession even further: claiming that he is not a surveyor at all but rather an impostor.5 As the son of a Castle sub-secretary assumes at the onset, K. could well be a “Landstreicher” (vagabond) and not a “Landvermesser.” Others point out that the term Vermesser is already undermined by a grim Kafkaesque irony: it signifies audacity and hubris (Vermessenheit) and, most importantly, the possibility of making a mistake while measuring (sich vermessen).6

Sugar Cane Panoramic View Green Book Land Surveyor Panama Canal
These keywords were added by machine and not by the authors. This process is experimental and the keywords may be updated as the learning algorithm improves.

I am a good boy and a lover of geography.

In every issue [of an old newspaper] there was an installment of a novel called The Commander’s Revenge. I once dreamed of this commander, who always wore a dagger at his side, on one particular occasion even held it between his teeth.