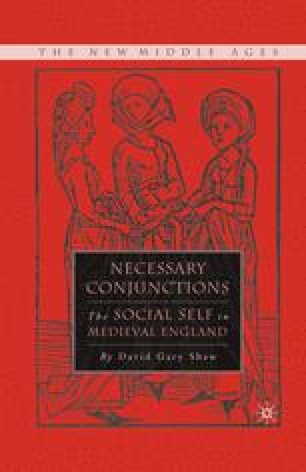 Necessary Conjunctions: The Social Self in Medieval England pp 145-163 | Cite as

Chapters 5 and 6 try to show the ways in which social selves were constructed from each other, by and through other people. By contrast, this chapter is an attempt to see how the material world was appropriated to social selves and how the social expression of self took essential material forms. Every act of work, of walking, of giving, of adorning, was in part an injection of self, a marking of territory, a singing of the body that was me-in-the-world. “Oh, how much cost is bestowed nowadays on our bodies and how little upon our souls! How many suits of apparel hath the one and how little furniture hath the other!”1 When William Harrison wrote this lament upon English customs in 1577, he was a late example of a religious and moral sentiment ignorant or disapproving of a long-lived feature of the culture.2 When Joan of Arc put on her pants, it marked and made her destiny, her difference from the other French girls, her calling. Her judicial trials circled around her clothes and she was eventually condemned for them.3 When Margery Kempe donned her headdress of gold pipes in early fifteenth-century Lynn, it was a projection of self, and its ethics were social rather than religious, inarticulate but deeply entrenched, albeit cast in an unfamiliar key for us and a contemptible one for the William Harrisons of the world. However, the crucial point is that the clothing mattered. It has been argued for early medieval culture that “materialism…utterly permeated every facet of social and personal experience.”4 The later medieval self also remained naturally expressed and understood through the things of the world.

Fifteenth Century Moral Sentiment Social Expression Indigo Blue Fine Clothes
These keywords were added by machine and not by the authors. This process is experimental and the keywords may be updated as the learning algorithm improves.

He bar a bordon ybounde with a brood liste,

A bolle and a bagge he bar by his syde;

An hundret of ampolles on his hat sette,

And many a crouch on his cloke, kayes of Rome,

And se by his signes wham he sought hadde….

When the ladies were separating for the toilette, he said to Elizabeth,—

“Do not make yourself uneasy, my dear cousin, about your apparel. Lady Catherine is far from requiring that elegance of dress in us which becomes herself and daughter. I would advise you merely to put on whatever of your clothes is superior to the rest; there is no occasion for anything more. Lady Catherine will not think the worse of you for being simply dressed. She likes to have the distinction of rank preserved.”