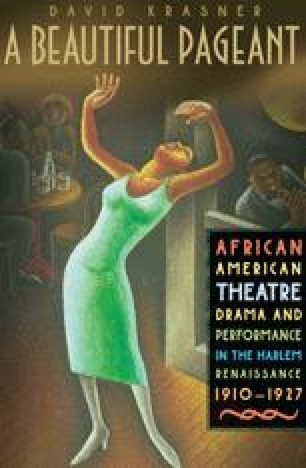 “What Constitutes a Race Drama and How May We Know It When We Find It?”: The Little Theatre Movement and the Black Public Sphere

By the mid-1920s nearly every major urban center had an African American theatre group. African American professionals and amateurs, especially in Harlem, Chicago, Washington, D.C., and Cleveland, formed theatres and presented plays, musicals, and staged readings. Although black theatres were experiencing what Nellie McKay termed “growing pains,”3 they retained a small but devoted number of patrons. The rise of the Black Little Theatre Movement from 1918 to 1927 emerged from an urban middle class seeking cultural enrichment and from black actors, playwrights, and directors unable to find work in mainstream theatre. The Black Little Theatre Movement derived its inspiration from a number of sources, including Ireland’s Abbey Theatre, Ridgely Torrence’s Three Plays for a Negro Theatre produced on Broadway in April 1917,4 Charles Gilpin’s success in Eugene O’Neill’s The Emperor Jones ,and a burgeoning little theatre movement in general.

Whatever the difficulties of art for the white man, the American Negro has his special burden. The Harlem art of the 1920s shows the strains that he lived under…. It attempts to speak with two voices, one from the stage of national culture and the other from the soul of ethnic experience.

If the traditional theatre, then, is now in a rut which affords no room for the one-act play, and if vaudeville is an empty cradle for this branch of dramatic art, where shall we turn?