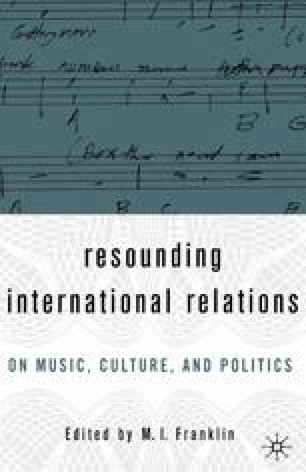 Do It Yourself: Punk Rock and the Disalienation of International Relations

You can do this: find two or three friends who you can work with closely for a year. Go to a pawnshop or look in the want ads to buy a basic drum kit, one or two electric guitars, a bass guitar, and amplifiers. You will also need microphones and an inexpensive PA. You will need a place to practice, and it is best if everyone commits to practicing for a couple of hours two or three times a week. Listen to punk rock together, and pick out half a dozen songs that all of you are willing to play. Most punk songs are fairly simple, stripped down rock and roll: learn to play your instruments on these “cover” songs. Your goal for playing these songs is speed and precision. After a few weeks of learning your covers, you will find that each of you is learning to listen to each of the others, and you should be communicating with each other about what is going right and what is wrong—problems like speeding the tempo up or dragging, or missing chord changes while singing. As your communication develops and as you begin to get tired of playing the same few songs all the time, you should begin to experiment with the basic forms—rhythms, chord changes—that you have learned. These experiments will be your first efforts at song writing. You will need to write lyrics for punk songs. Your songs should be about things that make you angry and that ought to make others angry, but do not preach in your songs.

In terms of these [higher, specialized] activities, the first definition of everyday life is a negative one. If in our minds (by a sort of abstraction) we remove the highly specialized occupations from man and from the human, what is left? An, apparently, very scanty residue. In reality the so–called residue contains a “human raw material” which holds hidden wealth, as our study shows. The higher activities derive from it, they are at one and the same time its ultimate expression, its direct or indirect critique and its alienated form—albeit an alienation embodying a more–or-less conscious and successful attempt to achieve “disalienation.”

Because if you boil punk down to remove all the hair dye, power chords, typewriters, colored vinyl, leather jackets, glue sticks, show flyers, and combat boots, that question is what’s left at the bottom of the pot Punk has always been about asking “why” and then doing something about it It’s about picking up a guitar and asking “why can’t I play this?“It’s about picking up a typewriter and asking,“why don’t my opinions count?”It’s about looking at the world around you and asking,“why are things as fucked up as they are?” And then it’s about looking inwards at yourself and asking “why aren’t I doing anything about this?“