Attitudes toward Sex in Antebellum America 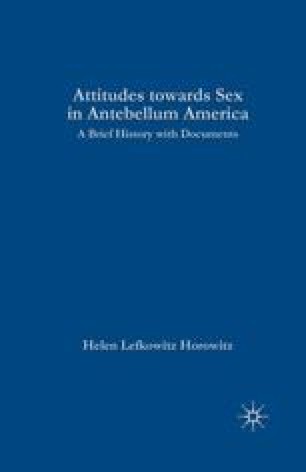 Attitudes toward Sex in Antebellum America pp 157-159 | Cite as

The New York Y.M.C.A. sent Anthony Comstock (1844–1915), a clerk and an anti-vice crusader, to lobby in Washington, D.C., for a strengthened federal anti-obscenity law. On March 3, 1873, Congress passed “An Act for the Suppression of Trade in, and Circulation of, Obscene Literature and Articles of Immoral Use,” which became known as the Comstock Law. This federal statute made it illegal and punishable by fines or imprisonment or both to send through the mail six kinds of material: erotica; contraceptive medications or devices; abortifacients; sexual implements, such as those used in masturbation; contraceptive information; and advertisements for contraception, abortion, or sexual implements. State, or Little Comstock, laws soon followed, forbidding the sale of these items. Courts interpreted the Comstock laws to put under the ban books and pamphlets supporting free love or offering sex education, even when written in a scientific manner.