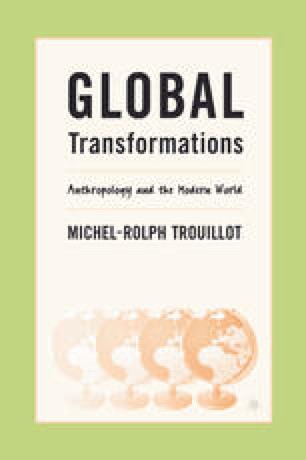 Anthropology and the Savage Slot: The Poetics and Politics of Otherness

Anthropology discovered globalization before the term became fashionable. By the late 1970s changes in the dynamism, mass, speed, and direction of global flows had seriously affected anthropological practice through their impact on the feasibility and relevance of ethnographic fieldwork. What did it mean to do fieldwork in India when there were so many Indians in New Jersey? Could one still pretend that non-Western peoples were so untouched by North Atlantic power that they truly constituted cultural isolates? Then, in the mid-1980s, as postmodernism announced ever louder the death of the grand narratives associated with Western modernity, a number of anthropologists tried to reassess ethnography— both fieldwork and writing—in relation to the increasingly suspect claims inherent in these narratives. They not only pursued the critique of progress launched by earlier anthropologists, but also engaged in a critique of representation that directly addressed fundamental assumptions of anthropological practice. The new wave of challenges brought forward by changes within and outside of academe required an archaeology of the discipline and a careful examination of its implicit premises.

Sixteenth Century World History Thematic Field Electoral Politics Global Transformation
These keywords were added by machine and not by the authors. This process is experimental and the keywords may be updated as the learning algorithm improves.
This is a preview of subscription content, log in to check access.

Cite this chapter as:
Trouillot MR. (2003) Anthropology and the Savage Slot: The Poetics and Politics of Otherness. In: Global Transformations. Palgrave Macmillan, New York