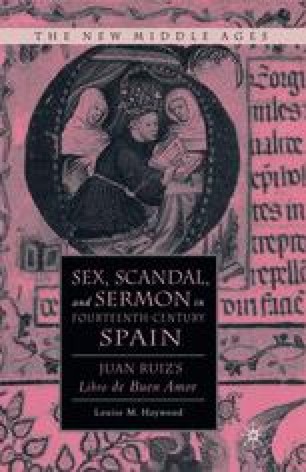 Psychic forms and the fallen human body are bound up in one another in the Libro. The individual human subject is “carried in soul but expressed in body,” as exemplified in descriptions of the Archpriest and the seducible beauty, which deviate from Schoolbook norms in order to express the somatic state through physiognomy, and in the exemplary fabliaux, where sinful acts lead to the disfigurement of body and soul.1 The effects of the Fall realized on the empirical person of the Archpriest are emblematic of its consequences on Everyman. Despite being a Venerean subject who enjoys some virility, his physiognomy marks him as an individual prone to failure in love. His ontological and ethical status, and that of Everyman, is called in to question when it is shown that the Archpriest’s position on the chain of being is, in fact, a feminized one in which he is less than a perfect and complete male, and shares qualities indicative of a sinful nature with Alda, the mountain woman, and the seducible beauty. Sin, particularly but not solely lust, marks the human body, revising its status down the chain of being away from the divine. Spiritual sloth and curiosity permit desire to direct the memory away from the fit usage of objects, and toward the improper to put the subject at risk of losing life and soul. Lust causes a fragmentation of the male subject, who experiences stasis and disintegration through a confrontation with his own méconnaissance and being denied a place in the symbolic.

Cultural Competence Bestial Feature Sinful Nature Courtly Love Imbalanced Faculty
These keywords were added by machine and not by the authors. This process is experimental and the keywords may be updated as the learning algorithm improves.
This is a preview of subscription content, log in to check access.