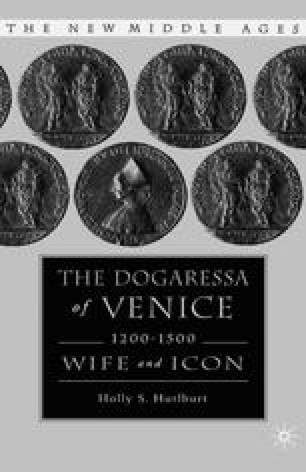 The ducal oath of office acted not only as an early ceremonial protocol for the doge, but provided hints about the dogaressa’s emerging ritual persona as well, and contained instructions about the two ceremonies that marked her creation: her private oath-taking and her public entrance into the Doge’s Palace. Ritual delineated the rhythms of the dogaressa’s office even as it defined much of late medieval life, creating a visual and experimental vocabulary for the celebration of crucial moments in the human lifecycle as well as communal civic and religious festivities. Ceremonial occasions allowed the expression of collective emotions such as joy, fear, or relief, and functioned as complex coded messages shaped by governing elites, the church, guilds, families, or other groups with varied and competing agendas. “Ritual was a demonstration of being but also the stage of becoming, the very working out of personal and civil order and structure. It is this combination of ritual required for showing a given order, and ritual manipulated by the participants to increase their own personality by augmenting that of the social order, that characterizes self-governing urban society in pre-absolutistic Europe.”1 Civic rites have thus proven to be useful, if complex, tools for accessing individual and group identities, relations between the state and the governed, as well as class and gender issues.

Wives should not act with their husbands as the moon does the sun; for when the moon is near the sun it is never visible, but when it is distant it stands resplendent by itself.