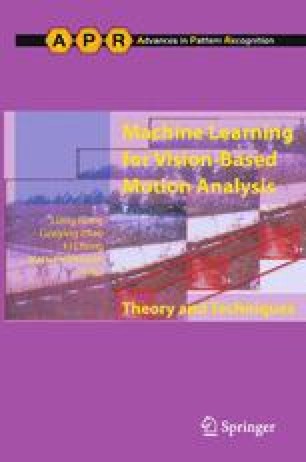 Extremely crowded scenes present unique challenges to motion-based video analysis due to the large quantity of pedestrians within the scene and the frequent occlusions they produce. The movement of pedestrians, however, collectively form a spatially and temporally structured pattern in the motion of the crowd. In this work, we present a novel statistical framework for modeling this structured pattern, or steady-state, of the motion in extremely crowded scenes. Our key insight is to model the motion of the crowd by the spatial and temporal variations of local spatio-temporal motion patterns exhibited by pedestrians within the scene. We divide the video into local spatio-temporal sub-volumes and represent the movement through each sub-volume with a local spatio-temporal motion pattern. We then derive a novel, distribution-based hidden Markov model to encode the temporal variations of local spatio-temporal motion patterns. We demonstrate that by capturing the steady-state of the motion within the scene, we can naturally detect unusual activities as statistical deviations in videos with complex activities that are hard for even human observers to analyze.

Optical Flow True Positive Rate Training Video Crowded Scene Query Video
These keywords were added by machine and not by the authors. This process is experimental and the keywords may be updated as the learning algorithm improves.
Download chapter PDF

Despite the general interest and active research in video analysis, an important area of video surveillance has been overlooked. Extremely crowded scenes, such as those shown in Fig. 2, are perhaps in the most need of computational methods for analysis. Crowded, public areas require monitoring of a large number of individuals and their activities, a significant challenge for even a human observer. Videos with this level of activity have yet to be analyzed via a computational method. Common scenes for video analysis, such as the PETS 2007 database [15], contain less than one hundred individuals in even the most crowded videos. Extremely crowded scenes, however, contain hundreds of people in any given frame and possibly thousands throughout the duration of the video.

The people and objects that compose extremely crowded scenes present an entirely different level of challenges due to their large quantity and complex activities. The sheer number of pedestrians results in frequent occlusions that make modeling the movement of each individual extremely difficult, if not impossible. The movement of each pedestrian, however, contributes to the overall motion of the crowd. In extremely crowded scenes, the crowd’s motion may vary spatially across the frame, as different areas contain different degrees of traffic, and temporally throughout the video due to natural crowd variations. As a result, analysis of extremely crowded scenes must account for the spatial and temporal variations in the local movements of pedestrians that comprise the crowd.

In this work, we present a novel statistical framework to model the steady-state motion of extremely crowded scenes. Our key insight is that the crowd’s motion is a spatially and temporally structured pattern of the local motion patterns exhibited by pedestrians. We model the spatial and temporal variations of the motion in local space-time sub-volumes to capture the latent motion structure (i.e., the steady-state) of the scene. We use this model to describe the typical motion of the crowd, that is, usual events within the scene, and demonstrate its effectiveness by identifying unusual events in videos of the same scene.

Motion-based video analysis characterizes the scene by the movement of the scene’s constituents within a video sequence. Trajectory-based approaches [5, 8, 9], for example, track the objects within the scene and describe their motion by their changing spatial location in the frame. These techniques are suitable for scenes with few moving objects that can easily be tracked, such as infrequent pedestrian or automobile traffic. Trajectory-based approaches focus on each subject individually, but the behavior of extremely crowded scenes depends on the concurrent movement of multiple pedestrians. In addition, the frequent occlusions in extremely crowded scenes makes tracking significantly difficult.

Other approaches estimate the optical flow [2, 3] or the motion within spatio-temporal volumes [4, 6, 7, 10]. Flow-based approaches have used HMMs [2] or Bayes’ classifiers [3] to represent the overall motion within the scene. The large number of people in extremely crowded scenes, however, make modeling specific activity by the collective optical flow difficult. Extremely crowded scenes may contain any number of concurrent, independent activities taking place in different areas of the same frame. This makes global approaches [2, 20] that model the motion over the entire frame unsuitable since the local events of interest would not be discernible from the rest of the scene.

Spatio-temporal approaches [4, 6, 7, 10] directly represent the motion in local sub-volumes of the video. Though these representations are well suited to extremely crowded scenes, their use has been limited to volume distance [4, 10] or interest points [7], requiring the explicit modeling of each event to be detected. In other words, they have not been used to represent the overall motion of a scene, just specific events. In addition, most spatio-temporal representations assume that the sub-volume contains motion in a single direction. In extremely crowded scenes, however, the motion within each cuboid may be complex and consist of movement in multiple directions.

Other work have modeled the motion of the crowd by flow fields [1], topical models [17], or dynamic textures [12]. Ali and Shah [1] model the expected motion of pedestrians in order to track pedestrians at a distance. More recently, Rodriguez et al. [17] model a fixed number of possible motions at each spatial location using a topical model. These approaches, however, fix the number of possible motions at each location within the frame. In extremely crowded scenes the pedestrian motions vary depending on the spatial and temporal location within the video. Pedestrian movements may be severely limited in one area of the frame and highly variable in others. As such, models that fix the number of possible movements may not represent the rich variations in motion that can occur in extremely crowded scenes.

The amount of pedestrian motion represented depends on the size of the cuboid. Since the camera recording the scene is fixed, we set the cuboid size manually. We consider this an acceptable cost of our approach since the size of pedestrians remains similar over the duration of the scene.

Ordinary HMMs are defined by the parameters M={H,o,b,A,π}, where H is the number of hidden states, o the possible values of observations, b a set of H emission probability density functions, A a transition probability matrix, and π an initial probability vector. We model a single HMM M n ={H n ,O n ,b n ,A n ,π n } for each spatial location n=1,…,N and associate the hidden states H n with the number of prototypes S n in the tube. The set of possible observations O n is the range of 3D Gaussian distributions of spatio-temporal gradients. Complex observations for HMMs are often quantized for use in a discrete HMM. Such quantization, however, would significantly reduce the rich motion information that the local spatio-temporal motion patterns represent. Using a distribution-based HMM allows the observations to remain 3D Gaussian distributions. Therefore, the emission probability density function for each prototype must be a distribution of distributions.

The distribution-based HMM represents the temporal variations of local spatio-temporal motion patterns in a sound statistical framework. The emission probability distributions are created using (4) and (8) for each prototype in the scene. Note that, while a single HMM is trained on the local spatio-temporal motion patterns in each tube, the prototypes are created using samples from the entire video volume. The parameters A n and π n are estimated by expectation maximization.

Modeling the temporal variations of the local spatio-temporal motion patterns in a statistical framework provides a natural way to define unusual activities as statistical deviations from the learned model of the motion of the crowd. Given a query video, the likelihood of a sequence of local spatial-temporal motion patterns can be calculated using the forwards–backwards algorithm [16]. Let \(\mathcal{T}^{n}_{t}\) be the likelihood of the tth temporal sequence of observations within a given video tube n. Thus
$$\mathcal{T}^n_t= \mathrm{p}\bigl(O_t^n,\ldots,O^n_{t+w}\bigr) , $$
(9)
where w is the sequence length, and \(O^{n}_{t},\ldots,O^{n}_{t+w}\) is a subsequence of observed local spatio-temporal motion patterns at location n. Ideally, we would like to measure the likelihood of each individual cuboid. Since \(\mathcal{T}^{n}_{t}\) is calculated for every sequence within the tube of length w, each observation can be associated with w likelihood measures by sliding a window of size w over the entire video. We define an ensemble function that selects a measure from the set of likelihoods associated with the observation. We use a window size of 2 and let the ensemble function maximize over the likelihoods. This correctly classifies the cuboids with the exception of one case when a usual cuboid is temporally surrounded between two unusual cuboids, which is rare and errs on the side of caution (a false positive). Since extremely crowded scenes may contain larger variations in one location than another, we normalize the likelihood of each observation by the minimum likelihood value of the training data in each spatial location n.

We demonstrate the effectiveness of our model of the crowd’s motion by detecting unusual events in videos of three scenes: one simulated crowded scene and two real-world extremely crowded scenes. For each scene, we train a collection of distribution-based HMMs on a finite length training video that represents the typical motion of the crowd. We then use these HMMs to detect unusual activity on query videos of the same scene. To quantitatively evaluate our results, we manually annotate cuboids containing pedestrians moving in unusual directions. We fix the cuboid size to 40×40×20 for all experiments, as such a size captures the distinguishing characteristics of the movement of the pedestrians. The threshold values are selected empirically since they directly depend on the variations in the motion within the specific scene.

We generate a synthetic crowded scene by translating a texture of a crowd across the frame, resulting in large motion variations and nonuniform motion along border areas. The image sequence consists of 216 tubes and 9,072 total cuboids. We then insert several smaller images moving in arbitrary directions to simulate unusual pedestrian movements. The thresholds used in this experiment are \(d_{\text{KL}}=0.02\), d Σ =5, d μ =1, and \(d_{\mathcal{K}}=400\). The Receiver Operating Characteristic (ROC) curve for this example is shown in Fig. 3, and is produced by varying values of the classification threshold. Our approach achieve a false positive rate of 0.009 and a true positive rate of 1.0. The false positives occur in cuboids lacking motion and texture.

False positives occur in both experiments for slightly irregular motion patterns such as after pedestrians exit the gate, and areas of little motion such as where the floor of the station is visible. The few false negatives in both real-world examples occur adjacent to true positives, which suggests they are harmless in practical scenarios. Intuitively, most unusual behavior that warrants personnel intervention would be less subtle than those detected here, and as such would result in a smaller number of errors. The ability to detect subtle unusual events, however, is made possible by training the HMMs on the local spatio-temporal motion patterns themselves.

Figure 5 shows the effect of increasing the amount of training data for the ticket gate video. As expected, the performance increases with the size of the training data, and approaches a steady-state with about 100 observations per tube. The performance with only 10 observations per tube achieves a false positive rate of 0.22 and true positive rate of 0.84. This is largely due to the window around \(d_{\text{KL}}\) for σ s in (8) when there is insufficient observations for specific prototypes and the inclusion of disjoint local motion patterns in the prototypes. The performance with such small training data reflects the rich descriptive power of the distribution-based HMMs.

This work was supported in part by Nippon Telegraph and Telephone Corporation and the National Science Foundation grants IIS-0746717 and IIS-0803670.