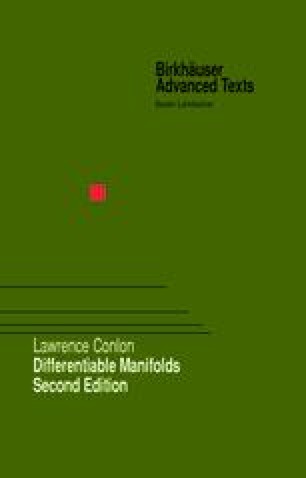 An important analytic tool in our study of manifolds M has been the Lie algebra \( \mathfrak{X} \)(M) of smooth vector fields. In this chapter, we begin the study of the dual object, the space A1(M) of differential 1-forms on M. One would expect this space of “covector fields” to be neither more nor less useful than \( \mathfrak{X} \)(M), but for many purposes it is much more powerful. One reason for this is the “functoriality” of A1(M), as will be explained presently. Another is exterior derivative and exterior multiplication, operations that produce higher order objects, called q-forms. These q-forms can be integrated over suitable q-dimensional domains and differentiated. A version of the fundamental theorem of calculus, called Stokes’ theorem, relates these operations and, in the global setting, leads to a remarkable tool (de Rham cohomology) for analyzing the topology of M. This, in fact, is the beginning of a major mathematical discipline called algebraic topology. Finally, theorems stated in terms of differential forms sometimes provide interesting and useful alternatives to equivalent vector field versions. An example of this will be a differential forms version of the Frobenius theorem.

Homotopy Class Piecewise Smooth Canonical Isomorphism Degree Theory Solid Torus
These keywords were added by machine and not by the authors. This process is experimental and the keywords may be updated as the learning algorithm improves.
This is a preview of subscription content, log in to check access.