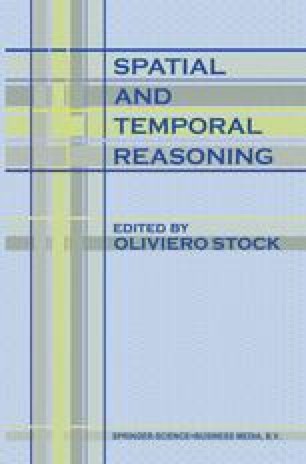 Representing and Reasoning with Qualitative Spatial Relations About Regions

Qualitative Reasoning (QR) has now become a mature subfield of AI as its tenth annual international workshop, several books (e.g. (Weld and de Kleer, 1990; Faltings and Struss, 1992)) and a wealth of conference and journal publications testify. QR tries to make explicit our everyday commonsense knowledge about the physical world and also the underlying abstractions used by scientists and engineers when they create models. Given this kind of knowledge and appropriate reasoning methods, a computer could make predictions and diagnoses and explain the behavior of physical systems in a qualitative manner, even when a precise quantitative description is not available or is computationally intractable. Note that a representation is not normally deemed to be qualitative by the QR community simply because it is symbolic and utilizes discrete quantity spaces but because the distinctions made in these discretizations are relevant to high-level descriptions of the system or behavior being modeled.

Convex Hull Geographical Information System Proper Part Intended Interpretation Spatial Entity
These keywords were added by machine and not by the authors. This process is experimental and the keywords may be updated as the learning algorithm improves.
This is a preview of subscription content, log in to check access.