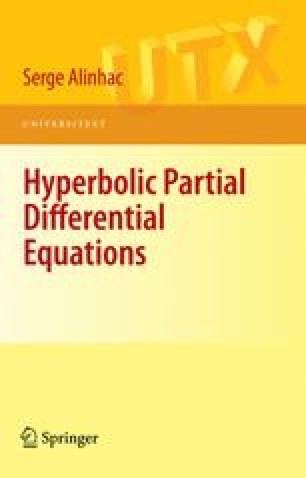 Consider, in \({\rm R}_x^n \times {\rm R}_t \), a second order partial differential operator of the form where all coefficients are real and C ∞, and L 1 is a first order operator. We would like L to be an operator similar to the wave operator, and to enjoy the same properties: Finite speed of propagation, energy inequalities, etc. We saw in  Chapter 2 that, for an operator in the plane, it is natural to require that its principal part should be the principal part of a product a real vector fields. Here, suppose first that L is homogeneous (that is, L 1 ≡ 0) with constant coefficients.

Wave Equation Cauchy Problem Geometrical Optic Principal Part Symmetric System
These keywords were added by machine and not by the authors. This process is experimental and the keywords may be updated as the learning algorithm improves.
This is a preview of subscription content, log in to check access.