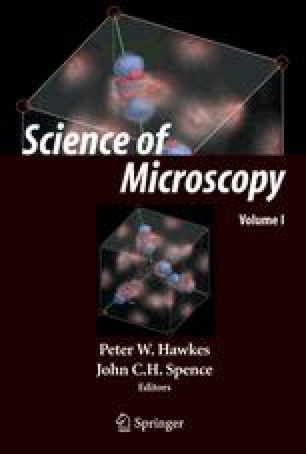 The term analytical electron microscopy (AEM) refers to the collection of spectroscopic data in the transmission electron microscope (TEM) based on various signals generated following the inelastic interaction of the incident electron beam with the sample. These signals can be used to identify and quantify the concentration of the elements present in the analyzed area, map their distribution in the sample with high spatial resolution (down to 1 nm or better), and even determine their chemical state. Although there are several signals generated by the interaction of primary incident electrons on a sample (Figure 4–1), the two main techniques at the core of AEM are based on the detection of X-ray signals generated in the sample by the primary incident electrons with the technique called energy dispersive X-ray spectroscopy (EDXS) and the measurement of the energy lost by the incident electrons with electron energy loss spectroscopy (EELS). These techniques are used within a TEM (Figure 4–2) equipped with EDXS, EELS detectors, and other detectors to record TEM images, diffraction patterns, and other signals that can be combined to form other images containing additional information on the chemical nature and structure of the sample. Other techniques such as cathodoluminescence, Auger spectroscopy, and electron beam-induced current imaging are also part of the arsenal of techniques available in the TEM but are less frequently implemented in commercial TEMs or have been used only as proof of concept. Convergent beam electron diffraction has traditionally been considered one of the AEM techniques, but given the breadth of this topic, the chapter will focus on the principles of EDXS and EELS, instrumentation requirements, the quantitative aspects of microanalysis, and the respective advantages and limitations. Throughout this chapter, several examples of application of these techniques in practical problems will be given. A comparison of these AEM methods with other analytical techniques is presented in a summary. Since this topic has been extensively covered in key detailed early textbook references (Joy et al., 1986; Williams and Carter, 1996) an update on the current status of the tech niques will be given based on recent published literature and examples of work.