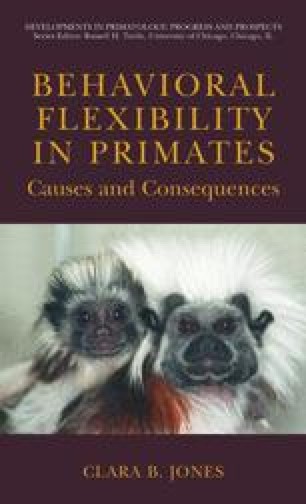 Behavioral Flexibility in Primates: Causes and Consequences pp 1-15 | Cite as

Chapter
Part of the Developments in Primatology: Progress and Prospects book series (DIPR)

Events in the world may vary simply by chance alone. Thus, caution must be employed where attempts are made to generalize. As Darwin (1859, 1871) understood, it is through the study of diversity that one identifies general patterns, most often by descriptive approaches prior to the application of appropriate quantitative methods of inference. Numerous students of primates have sought to describe broad patterns of response within the Order (Smuts et al., 1987; Dunbar, 1988; Dixson, 1998; Box, 1991; van Schaik and Kappeler, 1997; Muller and Thalmann, 2000; Kappeler and Pereira, 2003; Jones, 2002a; Jones and Agoramoorthy, 2003; Maestripieri, 2003a; Fewell, 2003), and monkeys and apes have long held a fascination for humans because of phylogenetic proximity. For this reason, primates of the Old World (Africa and Asia) are relatively well known compared to primates of the New World who diverged earlier from the anthropoid line.

Environmental Heterogeneity Behavioral Flexibility Howler Monkey Intraindividual Variation Primate Behavior
These keywords were added by machine and not by the authors. This process is experimental and the keywords may be updated as the learning algorithm improves.
This is a preview of subscription content, log in to check access.