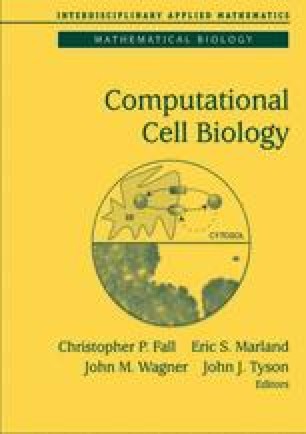 As an example of the use of the numerical algorithm developed in Chapter 12, we first consider a model for switching in the bacterial flagellar motor proposed by Scharf et al. (1998). Some bacteria, such as Escherichia coli, swim by spinning long helical flagella. Each cell has multiple flagella, all of which have the same handedness. When the flagella are spun in the counterclockwise (CCW) direction, they come together to from a bundle that propels the cell through the fluid. The motor that is responsible for flagella rotation is reversible. When spun in the clockwise (CW) direction, the flagella fly apart and the cell undergoes a tumbling motion. Addition of a chemical attractant causes the cell to suppress tumbling when moving toward this food source. One of the proteins in the signaling pathway is CheY. The binding of phosphorylated CheY to the portion of the motor located within the cytoplasm promotes CW rotation. To model motor reversals, the protein complex that forms the rotor is assumed to exist in two distinct conformational states that correspond to CW and CCW rotation. The binding of CheY decreases the free energy of the CW state, while at the same time increasing the free energy of the CCW by an equivalent amount. To capture this effect, the free energy of the rotor is assumed to have the following form (see Figure 13.1A): G(x) = 4ΔGnb (x4/4−x2/2) − 1/2ΔGx, (13.1) where x is an appropriate reaction coordinate, †G = G(−1) − G(l) is the free energy difference between the CW and CCW states, and †Gnb = G(0) − G(−1) is the free energy difference between the transition state and either the CW or CCW state when the CheY concentration is such that ΔG = 0 (i.e., there is no bias toward CCW or CW rotation).

Reaction Coordinate Load Force Molecular Motor Protonated Site Power Stroke
These keywords were added by machine and not by the authors. This process is experimental and the keywords may be updated as the learning algorithm improves.
This is a preview of subscription content, log in to check access.