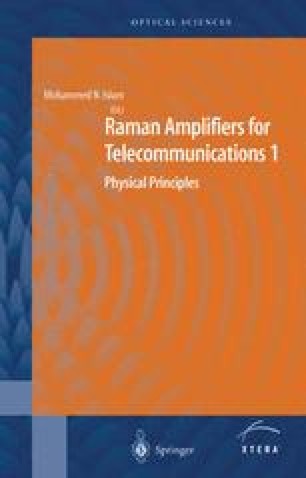 The potential of stimulated Raman scattering to turn transmission fiber spans into their own, distributed, low-noise amplifiers has been recognized and generally understood for several decades [1,2]. Indeed, before the erbium-doped fiber amplifier became available in the late 1980s, the Raman effect provided just about the only practical form of optical gain for fiber transmission, and was used in the first successful long-haul demonstrations [3]. Nevertheless, for early all-optical transmission systems, which tended to involve just one, or at most a handful, of WDM channels, the lumped erbium-doped fiber amplifier became the technology of choice, largely on the issue of the required pump powers. That is, when the total signal power was at most a few mW, there was little incentive to incur the trouble and expense of the hundreds of mW of pump power required for Raman amplification, when a very simple erbium fiber amplifier, pumped with just a few tens of mW, could provide the necessary narrowband gain. Thus the issue of pump power tended to completely overshadow the nearly contemporaneous understanding that distributed Raman amplification could provide for greatly reduced growth of ASE noise, especially in the context of the long (80 to 100 km) amplifier spans typical for terrestrial systems [4]. With the more recent advent of dense WDM and its demands for flat gain over wide bandwidths and greatly increased net signal power, however, the erbium fiber amplifiers rapidly became very complex, and began to require pump powers little different from those required for Raman gain! The consequent commercial development of high-powered, 1480 nm diode lasers (easily generalized to 14XX nm) tended to remove the principal obstacle to the use of Raman gain. Thus Raman amplification is now being rediscovered, not only for its superior noise performance, but equally for the ease with which it enables the establishment and maintenance of flat gain over the wide bands of dense WDM.

Pump Power Duty Cycle Pump Laser Pump Wavelength Raman Gain
These keywords were added by machine and not by the authors. This process is experimental and the keywords may be updated as the learning algorithm improves.
This is a preview of subscription content, log in to check access.