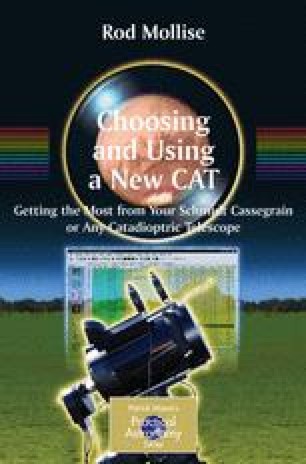 Some of the most useful “hacks” for CAT users—tips and projects that make good telescopes better—aren’t found in manufacturers manuals. They are passed around at astronomy club meetings or, increasingly, on the Internet in spots where CAT fanciers gather. Following is a sample of CAT hacks, tips, and projects contributed by members of my Internet SCT User and Meade Uncensored groups. These folks, noted in the Acknowledgments at the beginning of this book, were kind enough to share their expert knowledge in the interest of making your SCT better, easier to operate, and more user friendly. Keep in mind that none of the hacks that follow are in the form of detailed step-by-step projects. They are little blurbs and bullets that are only detailed enough to get you going on your own variations—to get the amateur astronomy creative juices flowing.

It would be nice to be able to collimate during daylight hours indoors or at least in...

Peanut Butter Alligator Clip Focus Control Battery Case Power Cord
These keywords were added by machine and not by the authors. This process is experimental and the keywords may be updated as the learning algorithm improves.
This is a preview of subscription content, log in to check access.