The Greatest Comets in History 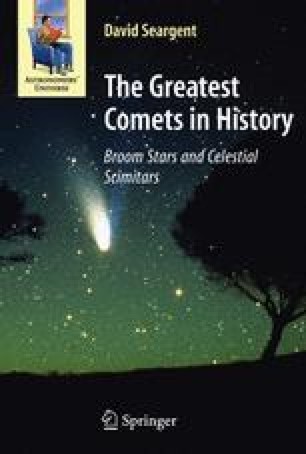 The Greatest Comets in History pp 1-34 | Cite as

Halley’s Comet Through the Ages

Ask anyone picked at random out of a crowd to name a comet, and we could bet that the name given would be “Halley.” The reason is not hard to find. With a period of around 76 years, a single trip around the Sun is so close to the Biblical “three score and ten” of human life expectancy that it has gained the title of “the once in a lifetime comet,” and the memory of its apparitions get passed down from parent to child like a cosmic family heirloom.

Because it is so widely known, some urban myths have grown up around it. Some folk have actually been surprised to learn that there are other named comets (though perhaps not as much in this post-Hale–Bopp, post-McNaught era), and for a long time there was a belief that Halley’s was the most spectacular of all the comets. This was probably influenced by accounts of the 1910 appearance (at times, dare we say, viewed through the magnifying glass of memory) and the fact that most of the really bright comets between 1910 and 1957 favored the...

Close Approach Plasma Tail Perihelion Passage Dust Tail Bright Comet
These keywords were added by machine and not by the authors. This process is experimental and the keywords may be updated as the learning algorithm improves.
This is a preview of subscription content, log in to check access.