Shakespeare and the Theatrical Event 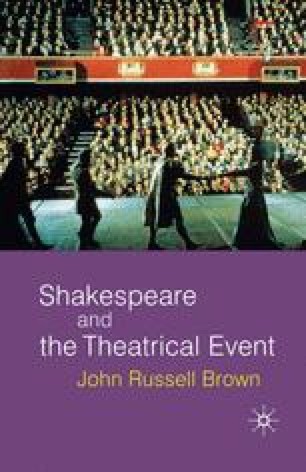 Shakespeare and the Theatrical Event pp 84-99 | Cite as

Persons in a Play

The persons represented by actors in a Shakespeare play can seem startlingly real. Palpably present before an audience, they discover new resources during the course of a play and may appear differently from one performance to another. These are complicated phenomena for which Shakespeare has been praised down all the centuries. When a play becomes part of a theatrical event, the audience watches its leading characters as they seem to be driven by their own thoughts and feelings in a course of action that leads to a conclusion that is both fitting and revelatory. With each new performance this process will change, sometimes very slightly, sometimes surprisingly so, offering the actors a journey of discovery. By the end of the play, if all goes well, both spectators and actors will have shared in the unfolding of a seemingly complete world that had lain hidden within the text and now has a life of its own. It can seem so effortless and inevitable that both audience and actors wonder how it has all been done.

Theatrical Event Perfect Character Dramatic Character Tragic Hero Dramatis Persona
These keywords were added by machine and not by the authors. This process is experimental and the keywords may be updated as the learning algorithm improves.
This is a preview of subscription content, log in to check access.