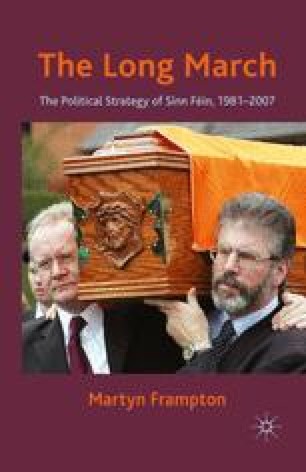 Despite the collapse of peace process negotiations in late 2004, republicans could look forward with confidence to the year ahead. The party’s centenary celebrations had been scheduled to take place in 2005, with a rolling series of events to mark the Céad Blain of Sinn Féin.2 The purpose of such events, as Gerry Adams declared at the official launch of the programme, was to ‘repopularize’ the republican struggle; it was to emphasize the republican ‘century of struggle’ as a way of expanding Sinn Féin’s electoral support base. In light of his party’s recent success, Adams noted, ‘Sinn Féin is now politically and organizationally stronger than at any time since the 1920s.’3

British Government Peace Process Irish Government European Election Hunger Strike
These keywords were added by machine and not by the authors. This process is experimental and the keywords may be updated as the learning algorithm improves.

‘The events of December 2004–March 2005 gave our political opponents a stick to beat Sinn Féin with and they certainly took it. It created a hysteria against the party in the media, which just goes to show that the old dictum that “all publicity is good publicity” isn’t necessarily so.’1